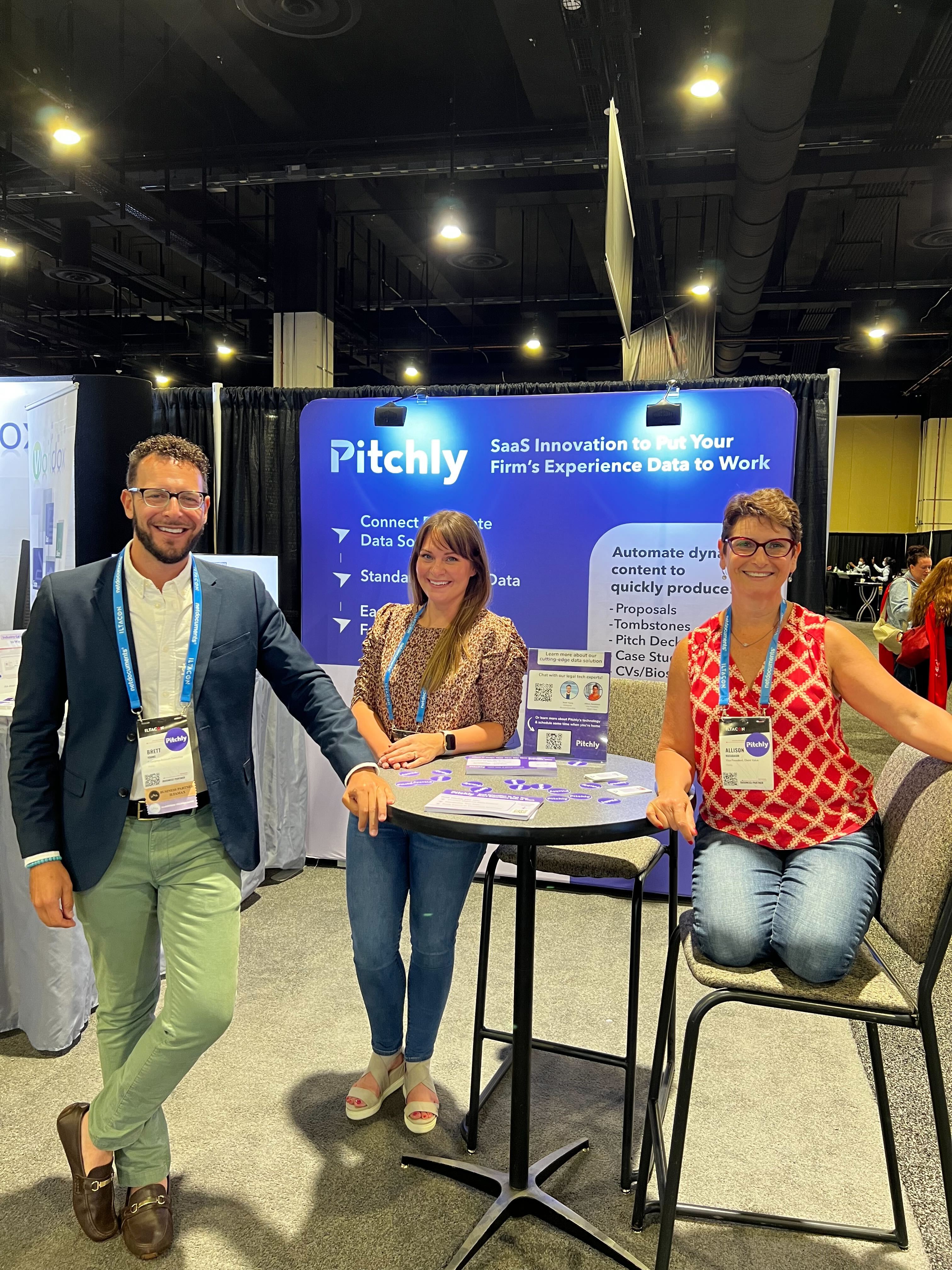 Let that sink in for a minute. Aside from the fact that very few of us have been in a venue with 3,000 other people in the past 2 ½ years, I cannot help but marvel at the fact that there were 3,000 of us at a conference of legal technology professionals.

My first ILTACon - then known as LawNet - was in 2001, and I don’t think there were 500 of us at that conference. Over the years, I have attended sporadically, and 2018 was my last ILTACon experience. Coincidentally, it was also held at the Gaylord National Harbor. It was a little bit deja vu.

This year was my first representing Pitchly at ILTACon, and it was only our company’s second time there. And I confess to being nervous. Would the attendees be interested in our message of data enablement and putting data to work?  I needn’t have worried. My colleagues Brett Young, Koral Hull, Ryan Gerhardy and I were welcomed with open arms – and we were more than busy. All I can say is thank goodness for the casual dress at ILTA because my AllBirds saved my life!

As I reflect on my conversations, three main themes emerged:

Unsurprisingly given that Pitchly is a cloud-native platform, we wholeheartedly agree that the cloud has attained business as usual status, with even the most conservative firms beginning to embrace the move to the cloud. Even those whose clients are in highly regulated industries.

Without question, the pandemic pushed many to move more quickly than they would have otherwise. As Meredith Williams-Range, Chief Knowledge and Client Value Officer at Shearman & Sterling, noted in her session, no client has stood in the way of the firm’s adoption of cloud technologies, as long the products were properly vetted, and security was assured.

There was not a soul at ILTACon who would not have agreed that change is hard; where we may differ is when we try to figure out what makes it so hard.

However, what we believe is, in fact, irrelevant. People’s perceptions are their reality, and it’s incumbent on those of us who are asking people to change to be sure we fully understand (and don’t assume) their reality.

Research is critical: just because a handful of people use a product in one way does not mean that everyone does. I spoke to several people whose organizations have employed trained change management professionals to help with various initiatives, not just IT. I think that’s a great step.

Many conversations centered on the need for improved workflow, process automation, and finding ways to use and repurpose data already being collected and how to get it out of the silos.

Given that we are in the business of helping law firms transform their data - most often related to experience -  into usable content, it’s not surprising that I had a lot of great conversations about interoperability and integrations – basically, how to repurpose data that already exists in the organization.

However, while law firms sit on a goldmine of data, the most critical part of these projects has less to do with technology than with problem-solving and goal setting. I have seen many false starts on integration projects because the teams had not spent enough time understanding the “why” – they jumped right to the “how.”

Understanding the problem you are trying to solve sounds trite and obvious, but it’s not. Organizations that figure out how to use that goldmine of data in a way that enriches its beneficiaries will lead the pack.

The Goodwin KM/IT Team’s  "Deep Deal" deal-term analytics platform, which was built using a combination of advanced technologies and helps Goodwin attorneys quickly identify "What's Market" trends for various transaction types, is a great example of this. (And is a finalist for an American Lawyer Industry Award in the "Best Use of Technology" category.)

All in all, it was a productive few days - albeit loud and exhausting.

To learn more about the Pitchly product and how it can help you take advantage of all the data you already have, schedule a demo.

Interview with the CEO: The Early Days of Pitchly

END_OF_DOCUMENT_TOKEN_TO_BE_REPLACED

How The Legal Industry Can Prepare for Economic Hardships

END_OF_DOCUMENT_TOKEN_TO_BE_REPLACED

How Data Enablement Can Boost DEI Initiatives in Executive Search